There are few monuments in the world more iconic than the Statue of Liberty, which has been welcoming the masses to the United States since its 1886 unveiling.

Most people know about the inscription mounted on a plaque on the pedestal of the statue on Liberty Island in New York harbour:

“Give me your tired, your poor,

The wretched refuse of your teeming shore.

Send these, the homeless, tempest-tossed to me,

I lift my lamp beside the golden door!”

These are the last lines of a sonnet, The New Colossus, written by American author Emma Lazarus as part of the efforts to raise money for the pedestal on which the 182m, 225-tonne statue stands.

Now, take notes. These 10 interesting tidbits about the statue might just win you a pub quiz when life gets back to normal after Covid-19: 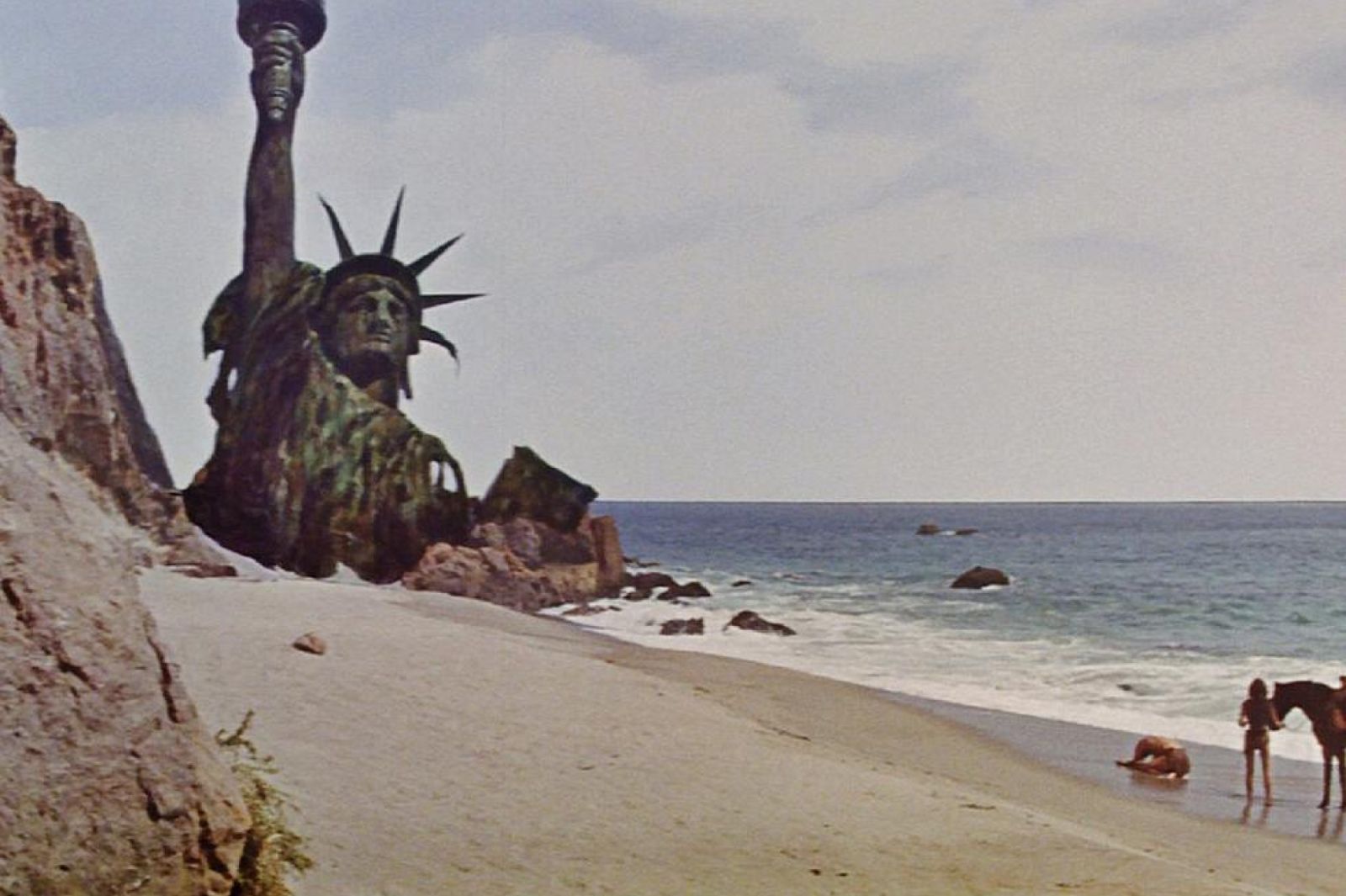 The Statue of Liberty has featured in many films, but its most iconic modern guest appearance was in the 1996 movie Independence Day, an action-packed thriller about aliens trying to wipe out the human race over the Fourth of July weekend. The Will Smith movie features a long shot of Lady Liberty lying face down in a river of rubbish. Although it’s impossible to list all the films the statue has featured in, another famous guest appearance was in the 1968 cult movie Planet of the Apes, which ends with the statue seen half-buried in sand.

2. It truly is a symbol of the brash Big Apple

Although the Statue of Liberty was unveiled in 1886, construction on the edifice began in France in 1876. In the intervening years, there was a lot of financial drama surrounding the statue, and much jostling between several cities eager to claim Lady Liberty as their prize. In a bid to secure the statue for the Big Apple,The New York Times even published an editorial calling Boston a “third-rate town”.

3. It was once a lighthouse

Yes, the Statue of Liberty was originally intended as an elaborate lighthouse. However, the torch did not emit enough light to warn ships and the statue was described in local newspaper The World as “more like a glowworm than a beacon”. Despite this, the statue functioned as a lighthouse for 16 years, until 1902.

The Statue of Liberty is one of New York City’s most popular tourist attractions, visited by around four million people a year. But its torch has been closed since the Black Tom explosion of 30 July 1916, which, according to the United States National Park Service, was one of the largest acts of sabotage on the US before the Japanese attack on Pearl Harbor on 7 December 1941.

The 2020 Covid-19 pandemic has temporarily closed the statue, and it was also closed – that time for security reasons – after the September 11 attacks on the US in 2001, with the pedestal reopening in 2004 and the whole statue in 2009.

In October 2012, Hurricane Sandy led to the whole island being closed after flood waters covered 75% of Liberty Island and almost all of Ellis Island, flooding the basements of all the buildings, except for the statue and monument.

Between 1984 and 1986, the statue was closed for restoration, reopening on 5 July 1986 in a centennial celebration. 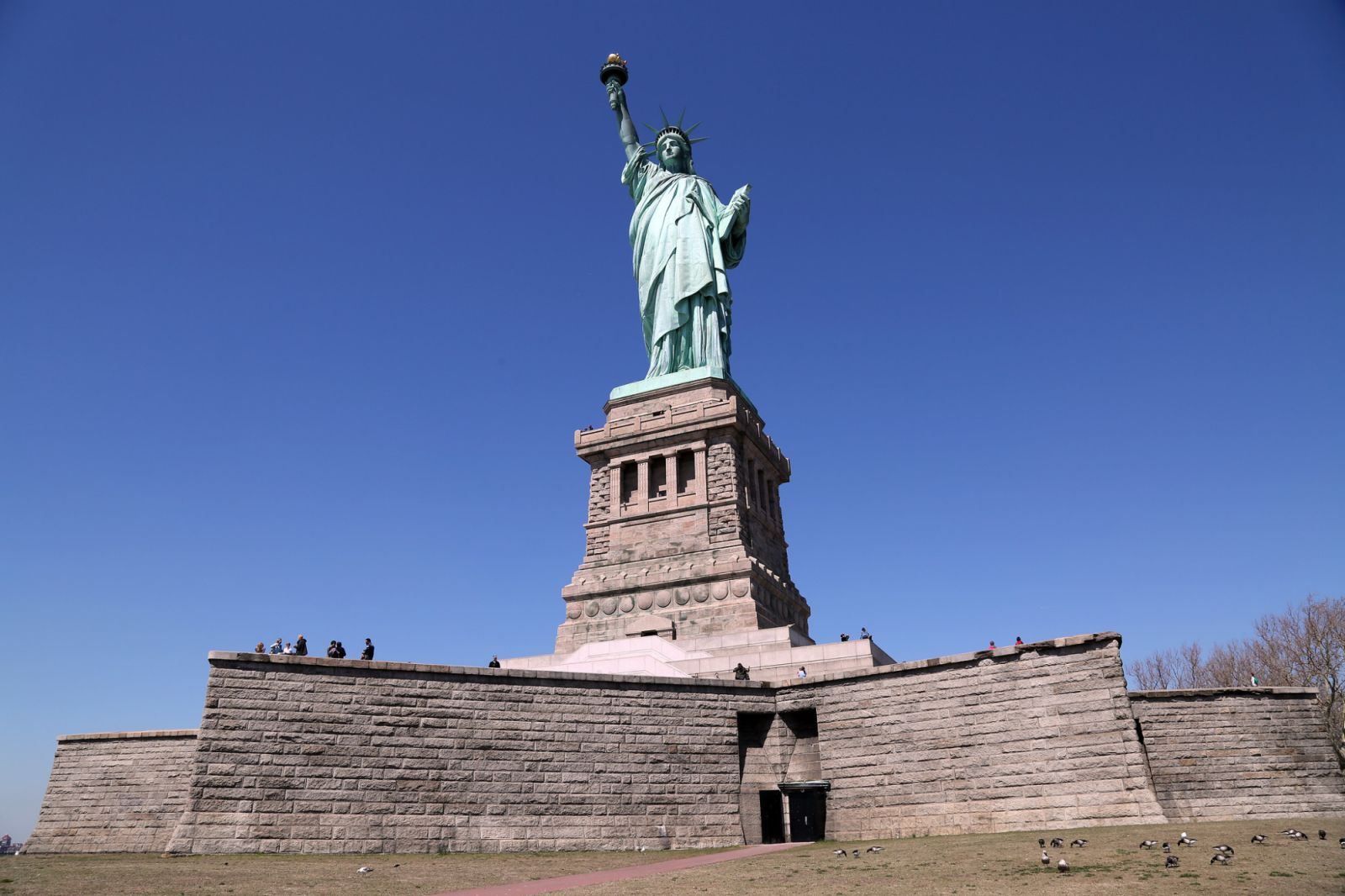 The United Nations Educational, Scientific and Cultural Organisation (Unesco) declared the Statue of Liberty a World Heritage Site in 1984, stating that it was a site of “outstanding universal value” and a “masterpiece of the human spirit”.

6. She has her own island

The statue is often thought to be on Ellis Island, famous for having been the US’s busiest immigration station from 1892 to 1954, but Lady Liberty has her own property – Liberty Island. She used to have neighbours – for more than 200 years, until 2014, people lived on the island, originally called Bedloe Island. The statue’s last neighbor was David Luchsinger, superintendent of the Statue of Liberty National Monument.

7. Her crown is a symbol

Each of the seven spikes on the Statue of Liberty’s crown represents the seven oceans and the seven continents of the world. 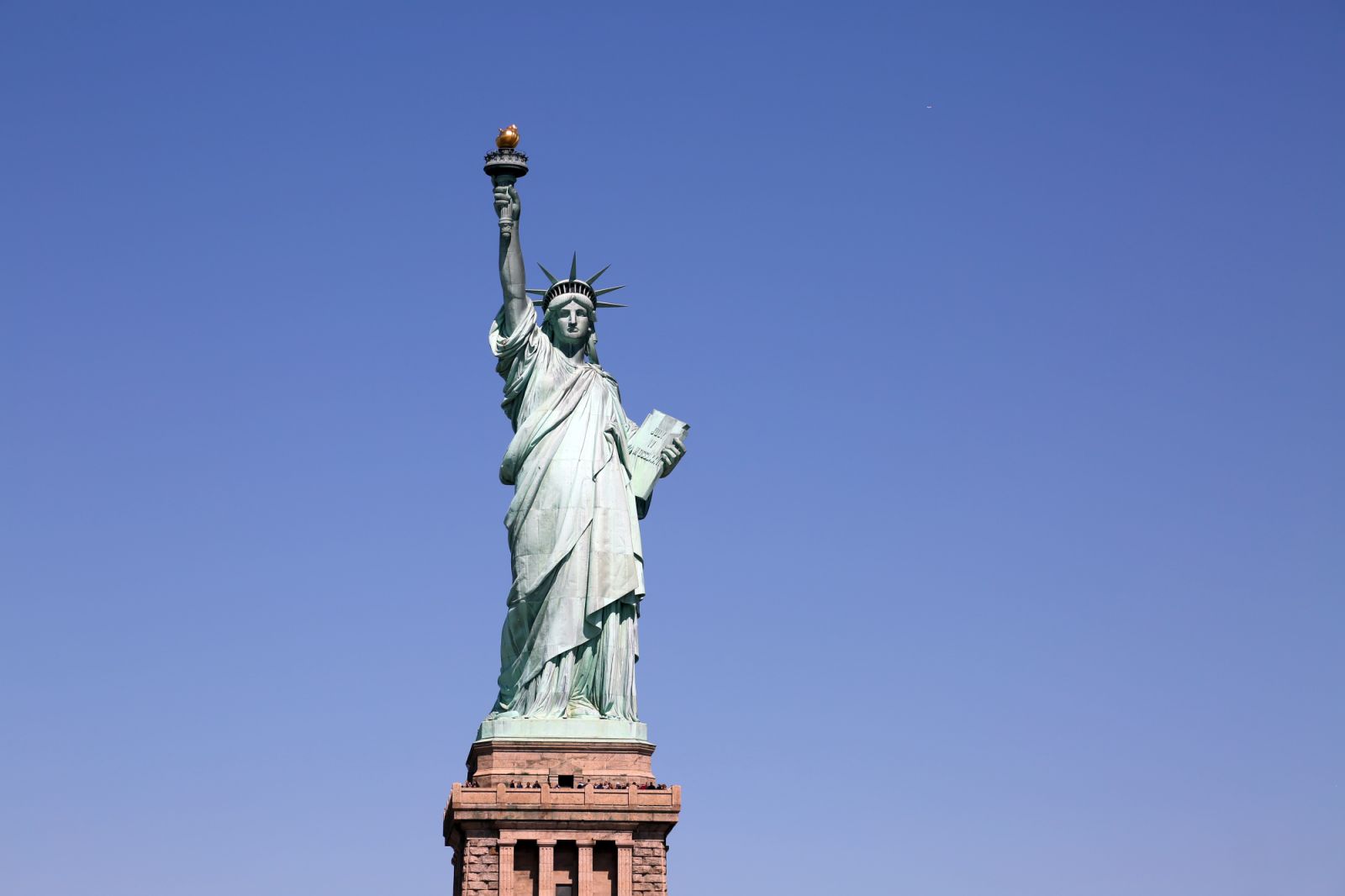 8. Her feet break the chains of slavery

When the Statue of Liberty was initially designed by French sculptor Frédéric Auguste Bartholdi, her hands were to hold the broken chains of slavery, but American financiers scuppered this idea. Instead, Lady Liberty holds a torch and tablet, inscribed with the date of the American Declaration of Independence (4 July 1776).

She still breaks the chains of slavery, however – with her feet. She is also stepping forward with her right foot, into a new, free era. Visitors can’t see the broken chains from ground level, however, as they are on top of the pedestal.

9. She has not been loved by all

While the Statue of Liberty is generally regarded as a symbol of freedom, justice and, in the second half of the 19th century, of the opportunities inherent in immigration, there have been those who have criticised the statue as ironic.

Lady Liberty’s critics have included African Americans who saw the statue as an ironic image of the US, professing to be a country of freedom and justice for everyone regardless of race, despite racism and discrimination continuing to exist.

Suffragettes also saw the statue as deeply ironic – a female symbol of liberty and justice who, if she came alive, would not be allowed to vote, as did people of Chinese origin, barred from immigrating to the US by the 1882 Chinese Exclusion Act.

Perhaps the most ironic aspect of the statue’s history is that she was erected in the late 1800s, when Native Americans were being excluded from their homeland and forced onto reservations. 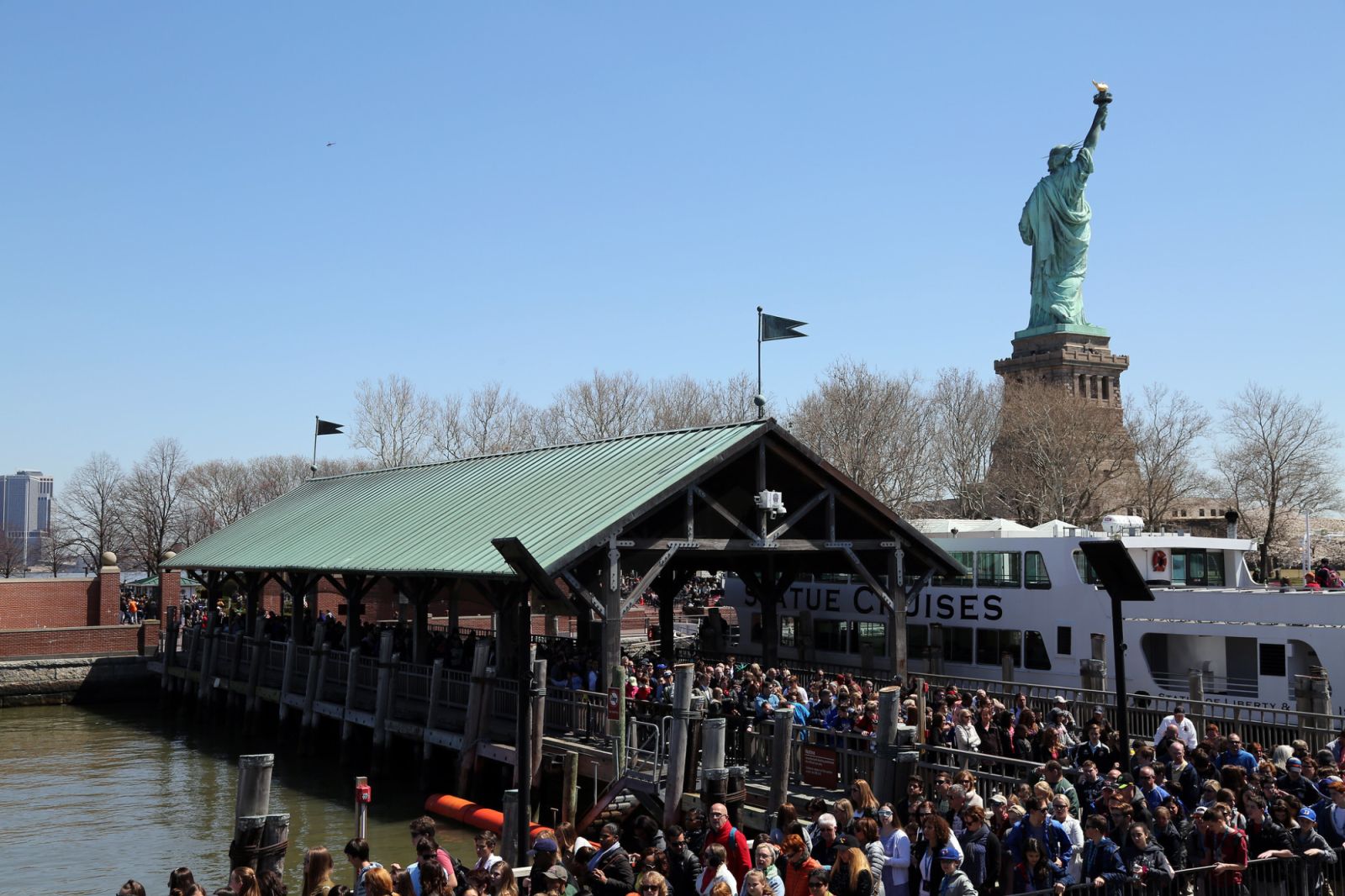 10. She has celebrated victory

In 1945, towards the end of World War ll, the lights in the statue’s crown flashed “dot-dot-dot-dash”, V in Morse code, for victory in Europe. Germany unconditionally surrendered to the Allied forces on 7 May 1945. For hundreds of American soldiers, however, the war raged on, with Japan finally surrendering to the Allies on 2 September 1945.

When tourism resumes across the world, these and other fascinating snippets from the Statue of Liberty’s 134-year history can be explored in the Statue of Liberty Museum, the most monumental addition to Liberty Island since the statue herself. The museum opened on 16 May 2019. 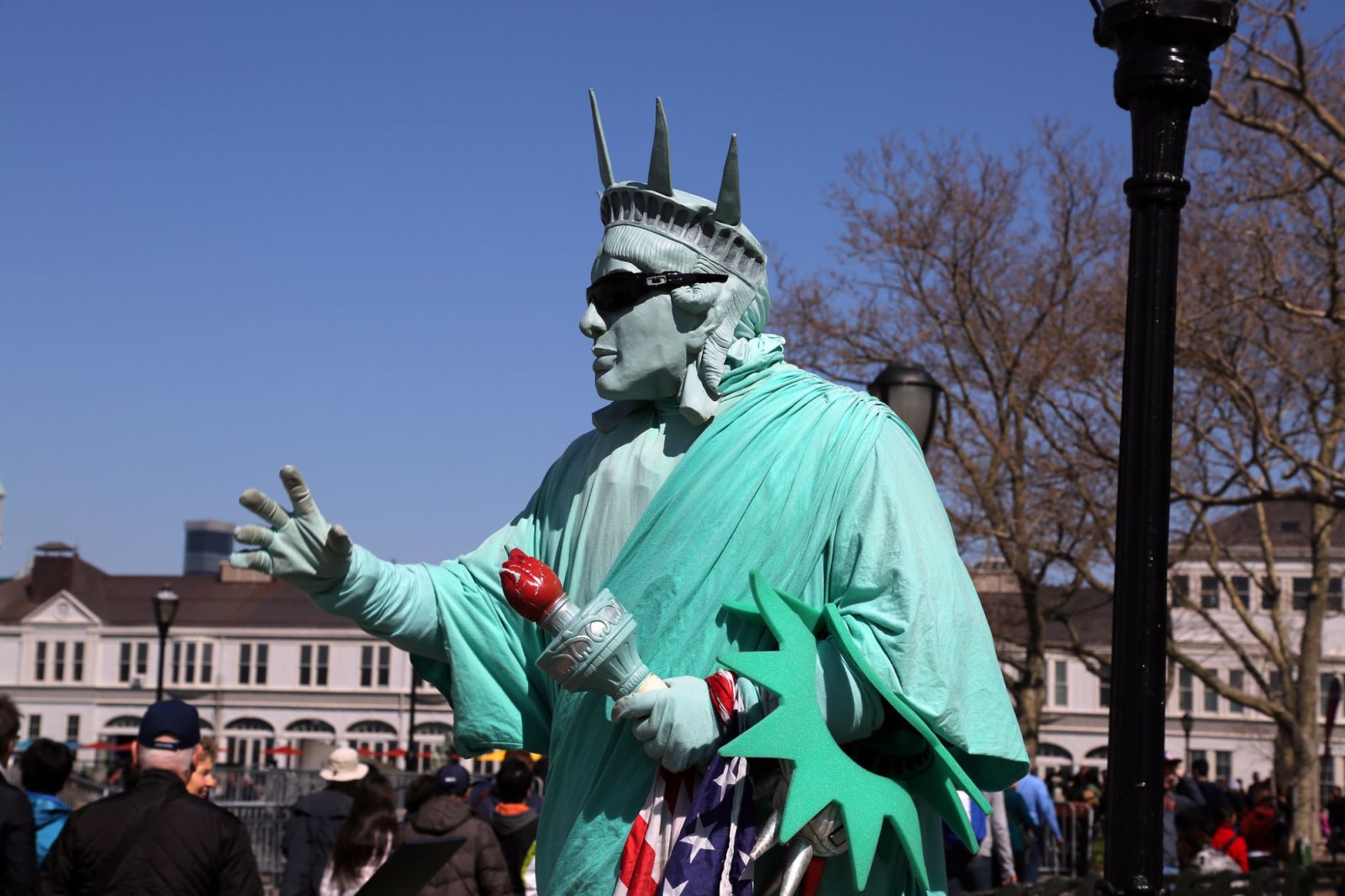